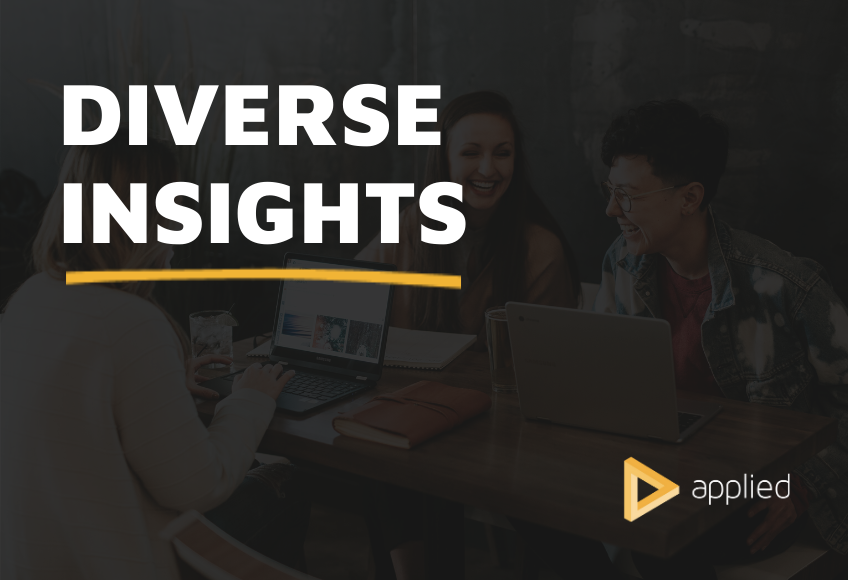 Introducing #DiverseInsights - a series of conversations with the trailblazers turning diversity, inclusion and belonging ambition into action. Our first conversation is with Aubrey Blanche.

Aubrey Blanche is Global Head of Diversity & Belonging at Atlassian. There, she works with teams across the business to enhance access to technical education, recruiting, retention and career mobility for underrepresented minorities. She believes that leading with empathy is the key to creating highly effective teams. Aubrey also serves as an advisor to the She Starts accelerator and is the co-founder of Sycamore, a community aiming to close the funding gap for underrepresented founders. Follow her on Twitter at @adblanche.

Q: You have come to this role from a really different academic and professional perspective; can you tell us a bit about your journey to this role and how that informs the way you see it?

I came to the diversity & inclusion space from a background that was...a bit zig zaggy. I was a journalist, academic political scientist, in business development, and then finally landed in a role helping organizations be more equitable. I’m most fundamentally a social scientist, which has deeply informed how Atlassian views these issues. We believe that building balanced teams (what most people call diverse teams) is an outcome of holding ourselves to the highest standards, and removing the structural barriers that underrepresented people face in the tech industry.

Q: You’ve made a deliberate move to change your title to head of diversity and belonging - what was behind that move?

I think that inclusion is just a low standard, and belonging is what human beings actually strive for. Inclusion is kind of like being invited to a party, and being told it’s because someone else cancelled: the equivalent of “We built a space, and it’s fine if you show up.” Belonging is like someone inviting you because it’s important that you’re there. Or, maybe “We built a space with you in mind, and would love for you to join us.”

Inclusion is kind of like being invited to a party, and being told it’s because someone else cancelled: the equivalent of “We built a space, and it’s fine if you show up.” Belonging is like someone inviting you because it’s important that you’re there. Or, maybe “We built a space with you in mind, and would love for you to join us.”

Q: Lots of fast-growing companies say they prioritise diversity and inclusion but then say they struggle to maintain a focus on it in the period of hyper growth. Did you ever face this at Atlassian?  How did you overcome it?

Prioritizing something while “struggling to remain focused on it” is not prioritizing it. It’s paying lip service without being willing to do the serious work and investing it takes to build an equitable organization. I’d love for companies to simply be honest about where balance & belonging fall on their priority lists: it would help underrepresented people avoid cultures and workplaces where they won’t be allowed to do their best work.

I’ve been really lucky at Atlassian because the majority of my time, we’re talking about what initiatives and approaches to prioritize, not whether it’s on the list. The absolute root cause of the improvements we’ve made over the years is Atlassians all over the company taking the work on as their own, and embedding it into their processes. That looks different for everyone and every team, but it’s crucial. For example, our Talent Acquisition team has built sourcing libraries to more efficiently identify underrepresented people for open roles. Total Rewards proactively audits our compensation programs for equity & fairness. Our Brand team has evolved our illustration style to better reflect our incredibly diverse global customer base. It takes a team to get this done.

Q: There’s a perennial debate over whether senior leaders need a business case to focus on the benefits of diverse teams - what’s your take?  How do you think about how you marshall the ‘case’ for diversity internally?  Has anything surprised you in that process?

I’m a believer that it’s fine for people to have different motivations for supporting equity & belonging goals. But at this point, senior leaders at any company are not doing their jobs if they’re not aware of the benefits of a diverse, engaged workforce and are actively investing in building it. There’s also a growing understanding of the risks of doing nothing (Dr. Lily Jampol has a fantastic explanation here), which are significant and growing as employees and the general public are less and less tolerant of abusive, exclusive workplace cultures.

At the end of the day, it’s the right thing to do ethically and for the bottom line.

Q: Atlassian has made a point of erring on the side of transparency with diversity reporting - why is that? What opportunities and challenges have you faced by taking this approach?

At Atlassian, we constantly talk about working openly. We believe that transparency helps hold us accountable to making progress, but also helps to highlight exactly how we would do that. Sharing externally--both where we’ve been successful and where we missed the mark--is a great signal to our customers as well as current and future Atlassians that we’re committed and making progress.

We’ve also released information about the balance of our teams at the team level, which has been crucial to the success we’ve had so far. Looking at this has helped us pinpoint where we can make the most progress.

Q: You’re active in the community and speak openly on Twitter and in other settings about the questions you’re grappling with - (i.e. your recent thread about the debate over the use of the term ‘person with a disability’).  Why is that?  What do you think others can learn from your experience?

I think it’s really important that people don’t see experts as “having all the answers.” I certainly don’t. Not only because our knowledge of equity and belonging is constantly changing, but because I’m just one person trapped in my own perspective. I rely on advocates from all sorts of groups to help me understand their experiences, deepen my understanding, and broaden my perspective. I also work hard to ensure that folks who are helping and educating me are compensated for their contributions, because this work is so, so often devalued. I’ve written about that--and why I charge for external consultations, here.

To be honest, that’s just part of walking the walk. If I’m not actively (and publicly, which comes with some personal risk) doing it, how can I ask others to?

Q: You work in Silicon Valley where the lack of women in technology roles is now reaching fever pitch.  People put this down to a whole host of things from the lack of female role models, to STEM education in schools, to the perception that the culture of tech is toxic toward some women.  In your experience, where is the problem most acute?

Honestly, I’d love to focus on the systemic and worsening exclusion of women of color--especially Black women--in technology. My answer would be the same. Tech’s culture and beliefs about talent are the greatest factors holding back the industry. It causes people to hire for “culture fit” instead of competence, exacerbates unconscious bias, and causes people to tolerate unacceptable behavior in their workplaces. It’s when we start unpacking these things (Is tech a meritocracy? Definitely not.) that companies and teams make real progress.

Tech’s culture and beliefs about talent are the greatest factors holding back the industry. It causes people to hire for “culture fit” instead of competence, exacerbates unconscious bias, and causes people to tolerate unacceptable behavior in their workplaces. It’s when we start unpacking these things (Is tech a meritocracy? Definitely not.) that companies and teams make real progress.

Q: James Damore, and the infamous ‘Google memo’, grabbed headlines and sparked a fierce debate about biological differences between the genders, merit, and hiring.  To what extent do you think his views represent people in the wider tech community?  And what would your advice have been if you had to make the call on whether to fire him or not?

I think there's a pretty sizeable group that believes these things, which is driven by the industry's overall (erroneous) belief that coding and tech are a meritocracy. That belief often gets translated to "Well, if the industry is predominantly White / male / etc, it must be because other groups aren't interested in or capable of this kind of work. The research on the fact that tech culture disproportionately discourages underrepresented people from joining or staying is solid (the Tech Leavers study from the Kapor Center is great), and it’s more useful to focus on solving real problems.

Q: What’s the hardest thing about making progress in this space? / If you had a magic wand what would you use it to change?

Honestly, the hardest part is that we (D&I professionals, advocates, underrepresented people) are trying to undo hundreds of years of bias and discrimination while being woefully underfunded and supported (McKinsey just released a report showing just this). Most companies invest in brand and recruiting, but not the hard work of cultural change.

In many ways, that’s a win for the companies that are doing the right thing. They’re going to have a competitive advantage in hiring and retaining the best people, because the “best” people come from all backgrounds, not just the ones that have traditionally had access to tech.

Q: If you could back just one intervention to improve belonging what would it be?

Be willing to get rid of people who are inconsiderate of others and unwilling to adjust when they’ve been given feedback, regardless of how “good” they are at their job or how much revenue they’ve generated. The willingness to enforce a positive, collaborative, respectful culture when necessary is the most powerful thing we can do to ensure that we are able to actually retain the best people.
‍

Q: What do you find most fulfilling in your work?

I have been given an incredible set of privileges in my life. I was able to get an amazing education and have professional opportunities I never even imagined. I like to think of my work as sharing those privileges and opportunities with folks who are denied them unfairly, and I am lucky to be able to support them in solving those issues. There’s no greater reward in this work than getting to see someone build something amazing or reach their potential because I’ve been able help create space for them to do so.

Q: What would you say are the three most obvious skills you need to do a job like yours and what are three less obvious ones?

Obviously, folks need expertise in equity and organizational and social change. I think it’s less appreciated but more and more crucial for people to have strong communication, influence, and analytical skills. Those last three make the difference between a D&I program that’s theoretically amazing and one that drives impact and results for individual employees, teams, and companies.

Q: Which other companies do you learn from in this?

I’m constantly learning from other companies and D&I leaders. I really appreciate how Pinterest takes a data-informed approach to building an equitable company, but the fact is that there are so many companies doing interesting things. The truth is, the CDO community is pretty close, and we’re constantly sharing opportunities, learnings, and best practices. We all understand that this is an industry-level problem that requires industry-level solutions, and collaboration across companies is the only way that we’re going to get there.

We hope that after reading this conversation, you’ll be inspired to take action and make diversity a priority in your organisation. We think that our resource centre is a great start. It’s packed full with guides and studies for the next champions of diversity, inclusion and belonging.