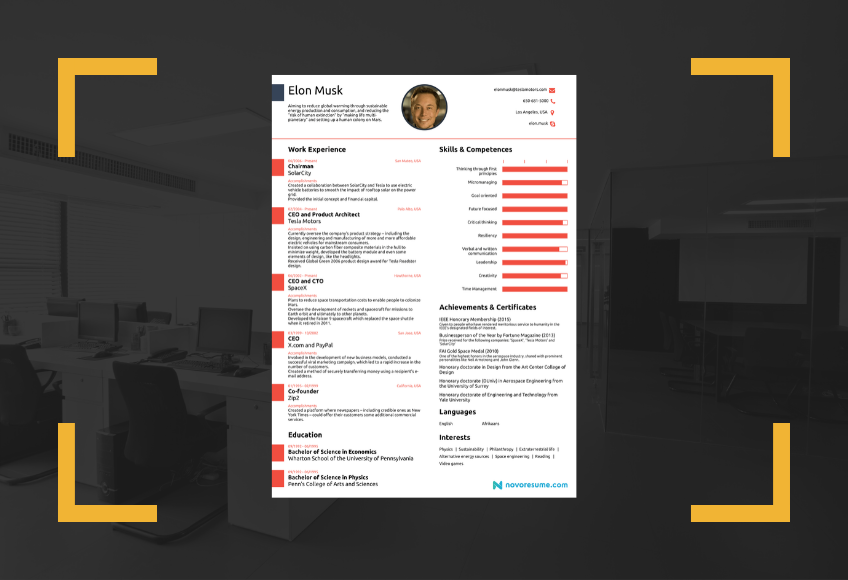 A couple of weeks ago, CV company Novorésumé released a tongue-in-cheek bio of Elon Musk, aiming to use his pretty spectacular career to demonstrate that no matter who you are you can always fit the important information on a single page.*

*I would use the Americanism, résumé there instead of CV but I’m afraid too many acutes in one sentence could hit critical mass & cause some kind of pronunciation meltdown, and I don’t want to be responsible for that. Just bear in mind that résumé and CV mean the same thing and I may switch back and forth between the two to keep you on your toes.

The Novorésumé product looks great, but as a hiring manager neck deep in the science around hiring bias I think we can cut that CV down even further by removing;

After those are taken out, only eleven short sentences of this information is actually of predictive value. Three quarters of the page is empty.

Well okay, this example is a bit daft, as the word “Elon” anywhere near the word “Musk” can make even hardened tech-bros squeal like Beliebers, but if we’re intent on railroading this example we might as well get a seat in the dining car and order the lobster.

So without further ado; here’s our justification, complete with kindergarten-quality markup, the painstaking product of three fat-fingered minutes in Microsoft Paint.

Name
It’s been shown over and over again that names trigger unconscious bias. This makes it harder for people perceived as being in an out-group to get callbacks to interview. This problem can significantly affects women and minorities.

Personal statement
To an extent candidates opinion of themselves is shaped by their background and expectations of life, as is their understanding of what a hirer wants to hear. Candidates also have inconsistent access to advice and role models to help shape that message so its quality and appeal will correlate with socio-economic status.

Photo
Studies show that appearance influences selection decisions, by revealing percieved race & gender status, by revealing attractiveness, and allowing hirers to read personality traits into facial characteristics. All three of these skew decisions away from a pure performance evaluation.

Contact information
These can trigger name-related biases if your name forms part of the address or username. They can also carry biasing geographical or socioeconomic clues, e.g. dave@russiamail.ru, or dave@wimbledon-community-college.ac.uk. Your choice of contact media may also leak information; e.g. listing your Snapchat for a Director-level role may raise eyebrows.

Zipcode/postal code
Your address is an indicator of socio-economic status and hence a source of bias.

Opinion of your own skills
Surprise surprise your own self-evaluation is based on your confidence level, and sense of entitlement. You could argue that these self-assessments are useful to assess relative strength not absolute strength; but they’re relative to people this candidate has worked with, and you don’t know who that is… so where does that leave you?

Attainment
Context is key. Performance in one arena under one set of motivators & conditions is not predictive of performance in a second. The student with quiet comfortable lodgings may well perform better on paper than the student working two jobs and living in a slum, but the latter may be better motivated and has resilience. You can’t tell who’s going to perform better by looking at educational attainment.

University
Where people went to university is not strongly predictive of performance. Additionally it is predictive of socio-economic status.

Extracurriculars
Candidates hobbies can be strongly biasing; for example allowing hirers to be swayed by clues that you share a similar background to them.

All in all that doesn’t leave much for hiring managers to tell who’s good and who’s not; basically just the experience section… and as we know from studies that a biographical inventory like that can be of comparatively low value.

It may feel like we’ve taken away a lot of the useful information, but here’s the trick. That information was a mix of noise and red herrings. A mirage.

As a tool, the CV/résumé is an anachronism; the fax machine of the employment world. Where we’re going; we don’t need it.

In case anyone is reading this thinking that removing obstacles to diversity is “lowering the bar”; your thinking is crooked. Let’s fix it up. By leveling the playing field, hiring is made fairer. This means that companies no longer miss out on great hires, which is smart. The tricky part is making it easy, but that’s down to your choice of tools.

So what to do instead?

We know from studies that some ways of assessing candidates are more predictive of performance than others.

The highest ranking predictors of performance

Combining these types of assessment are currently the best known way forward in terms of figuring out who to hire.

(Disclaimer: in case you didn’t know, we provide a product that uses these high-predicting assessment methods and excludes as much bias as feasibly possible)

A note to the team at Novorésumé, in case you read this post; we think you’ve built a great product, but for some of the reasons we’ve touched on in this post think that the résumé as a concept needs to die. If you wanted to chat with us about alternative directions you could take your product we’d love to shoot the breeze with you.

Richard Marr is co-founder and CTO of Applied, a SaaS platform that increases hiring precision and reduces bias. While he talks big, he’s actually full of crap, and rather spuriously claims to have invented A/B testing.