Biased, broken and full of bullsh*t: the case for killing CVs (backed by science) 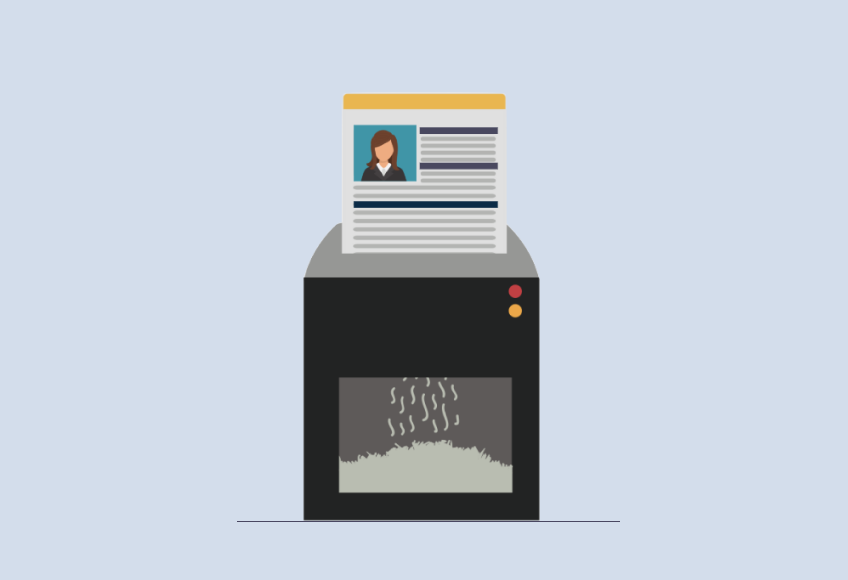 At Applied, we set out to build a predictive, unbiased hiring platform that uses data to find the best candidates. The first thing we did was put CVs on the chopping block. Here’s why YOU should do the same.

CVs suck. The data says they suck. And deep down, you know they suck too.

CVs have been knocking about since the 50’s.

And guess what - technology has come a long way since then.

We no longer communicate via telegraph.

We don’t work on typewriters anymore.

So why are still using CVs?

Very much unlike a fine wine, they’re NOT getting better with age.

Our case for killing the CV is pretty simple really: CVs are biased and they’re not predictive of skills.

But, isn’t it about time we severed ties with a primitive hiring method that doesn’t do candidates OR employers any justice?

So fasten your seatbelt and hold on tight, here’s why the CV must DIE!

Exhibit A: CVs have been proven to invite bias

CVs allow reviewers to discriminate against candidates, both consciously and unconsciously.

Maybe without even knowing it, you make snap judgments based on information like:

The truth is, details on a CV are used to find reasons to EXCLUDE candidates.

Dismissing people because they didn’t work at a big company you’ve heard of is bad.... very bad.

BUT, candidates are being overlooked because of details that have nothing to do with their experience or skills.

I know what you’re thinking: this sounds very pessimistic. However, this is the reality of what's happening.

When sending off a job application, women and people of minority races are less likely to be contacted, despite having the same qualifications as those with Caucasian and male names. (Carlsson & Rooth, 2007; Oreopoulos, 2009; Pager et al, 2009).

Research has shown that simply changing the name on an application can significantly alter call-back rates, even for employers with a public commitment to equal opportunity.

Experiments in the US, Canada and Australia which involved sending fake resumes to real employers reveal that the response rates to otherwise identical applications can be up to 50% higher for ‘white sounding’ names. In the UK, that figure is just over 75%.

So why don’t we just blank out names, addresses and other identifying information on CVs?

Well, some companies are doing just that - manually blacking out personal details.

Think about that for a second… our current CV process is so broken that people are going to town on them with permanent markers.

The problem is that what’s left is STILL not as relevant as you think.

Here’s a thought: why don’t we just do it differently, rather than desperately trying to revive a long-dead, archaic process?

GET THE FULL REPORT: CVs: WHY THEY'VE GOT TO GO AND HOW TO REPLACE THEM

Are you snobby about education and experience?

Bias isn’t just about discriminating based on physical differences, it comes in many forms. Here’s just a few kinds of bias that CVs perpetuate:

Affinity bias: the tendency to like people who are similar to us or remind us of someone we like.

Maybe a candidate has a similar background to you, maybe they went to your university or held past roles like yours.

Confirmation bias: the tendency to search for, or interpret information that confirms one’s preconceptions.

You take a liking to a candidate and so you think everything they’re saying in their CV is spot on (whether it is or not).

Oh, this person went to Loughborough Uni and did a cool sounding degree, they must also be very good at their job too.

I hate to break it to you pal… but you’re not!

Why? Most of your biases are likely UNCONSCIOUS.

Think about this: the average time spent reviewing a CV is 7.4 seconds.

How long do you take to browse a menu at a new restaurant?

Why are you spending longer choosing between the cheeseburger or fish and chips than reviewing applications for your new developer or salesperson?

Perhaps it’s because 7.4 measly seconds is all it takes to scan a CV for disqualifying information and move onto the next.

The order in which you look at CVs affects your judgment

It’s not just about the content on someone's CV. Even time itself can influence biases.

Even when using our own CV-less assessment method (more on that to come), we found that the order in which applications are assessed affected their ranking.

Psst... that’s why the Applied platform randomises the order in which applications are reviewed.

Here’s a snapshot of our findings:

In the words of former head of HR at Google Laszlo Bock, “It (the CV) doesn’t capture the whole person. At best, they tell you what someone has done in the past and not what they’re capable of doing in the future.”

It’s a list of what you have already done. Not what you can do.

In a nutshell, this is why CVs aren’t predictive of skills or ability.

Take a long, hard look at these findings from Schmidtt & Hunter's landmark meta-study…

(The numbers along the bottom represent the predictive power of each assessment method).

And would you look at that…

The staples of your bog-standard CV - years of education, years of experience and references - are the LEAST predictive ways of assessing candidates ability to do their job.

Which again begs the question.

Why on earth are we still using them?

How do you know candidates are even telling the truth?

Ladies and gentleman of the jury…

If all of the above has not convinced you to start feeding CVs to shredders, consider this...

People lie on their CV.

According to HireRight's 2017 employment screening benchmark report, 85% of employers caught applicants lying on their CVs.

Are you telling me everything on your CV is 100% true?

Maybe you're a squeaky-clean saint, who would never tell a porkie or even entertain the thought of overstating their involvement in an important sounding project.

But if you’re a mere mortal like the rest of us, you’ve probably given yourself a little undeserved sprinkle of credit somewhere on your CV.

Here’s a little nugget of data for you to bear in mind: top 1% employees perform 25x better.

And whilst I’m sure you’re a smart cookie (you’re reading this article after all), chances are you’re not psychic.

Although you might think you have a knack for spotting those top 1%, golden candidates, the data suggests otherwise.

CVs can’t tell you who the best person for the job is.

Because they’re not asking the right questions.

Lot’s of companies are now spending eye-watering amounts of money addressing their diversity (or lack thereof). Google alone spent $114 million on diversity-related programs back in 2014.

The system is broken. We have to change the system, not put a plaster on it.

Rather than train people how to navigate the broken system, would it not be more effective to change the system itself?

The alternative: Use work sample questions to assess skills.

You want the best person for the job. Not the candidate that’s been to the ‘best’ uni or with the biggest company on their CV.

When we’re hiring new recruits to the Applied team, we don’t ask for CVs.

We haven’t seen a single one.

Our team come from all different backgrounds, and we haven’t had to let anyone go because of performance OR 'cultural fit’... or let anyone go at all for that matter.

So if you’re not going to use CVs, what should you do instead?

Try using what we call ‘work sample questions’, or ‘sift questions’: job-specific questions that test candidates on the skills needed to succeed in the role.

Think of the skills you’d like your new hire to have. It’s best to go for a mix of general qualities (like creativity, communication, etc) and more job-specific, technical skills (like Excel or HTML).

Then come up with 4-5 questions to test those skills/ qualities. You can test multiple skills with one question.

For instance, when hiring for a new member of our sales team, we asked the following question to test candidates’ persuasion and research skills:

“We're in the process of reaching out to management consulting firms as part of this week's marketing campaign: Draft an email to the Head of HR, introducing Applied, and trying to arrange an introductory call.”

This way, you’re giving yourself clear guidelines for assessing applicants so you won’t be wooed by fancy words or technical jargon.

We don’t use this method for fun (although our candidates have reviewed us very highly). We use it because it’s the most PREDICTIVE.

If your bin isn’t brimming with CVs yet, I understand.

But the first step to recovery is admitting there’s a problem.

And believe me, if there’s one thing to take away from all the above, it’s that CVs are indeed a big problem.

Need a crash course in unbiased, predictive hiring methods? Take a look at our guide to work sample questions. If you’re already sold on giving CVs the chop and using data to hire top talent, feel free to request a demo.