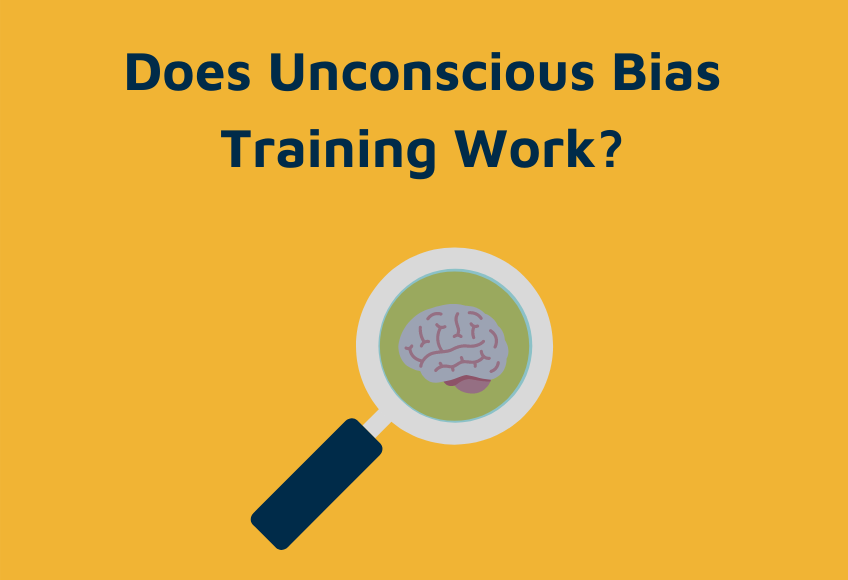 DID YOU KNOW? Companies spend $8 billion on bias training every year.

But does unconscious bias training work?

Below, we've broken down the key studies surrounding the effectiveness of bias training.

You can read our full report on unconscious bias training here.

The short answer is no.

However, the reality is a little more complex.

Unconscious bias training does have some effect.

Bias is reduced for a period of time after training.

And there's value in raising awareness around bias.

But when we look at actual behaviour change, this is where training fails to make an impact.

If you're looking into unconscious bias training to improve diversity and inclusion - given that a one-day course for 50 people costs an average of $2,000 to $6,000 - it's probably not worth investing in.

Unconscious bias training doesn't work because most of our bias (as its name suggests) is unconscious.

We don't know we're doing it.

If you make people aware of their bias, they might be able to make better decisions for a period of time.

However, without constant reminders, our unconscious bias will slip back into decision-making.

And we may be biased even when we believe we're being objective.

The truth is: you can't train bias out of people.

Why? Because unconscious bias is human nature.

Although de-biasing people isn't the way forward (at least not a cost-effective one), bias can be reducing by de-biasing processes instead.

De-biasing environments, rather than people

When it comes to changing behaviour, instead of changing the people who make decisions, it's more effective to change the environment decisions are made in.

In terms of recruitment, you can't change the way a hirer's brain works, but you can change the hiring process itself.

Rather than tell people not to be biased, you can simply design a process that removes the possibility of bias.

This is exactly why we built Applied - to remove unconscious bias from the hiring process.

Why spend a fortune on training individuals when you can build a process that negates bias by design?

To find out more about how we go about de-biasing hiring, grab a copy of our go-to manual below (everything we recommend can be set up without our platform and without spending a penny).

We designed the Applied platform to make fair, data-driven hiring as easy and effective as possible - from writing conversion-optimised job descriptions to tracking and reporting on your recruitment success.

If you’d like a whistle-stop tour of how it all works, feel free to book a demo, or browse our resources.