What is blind hiring? 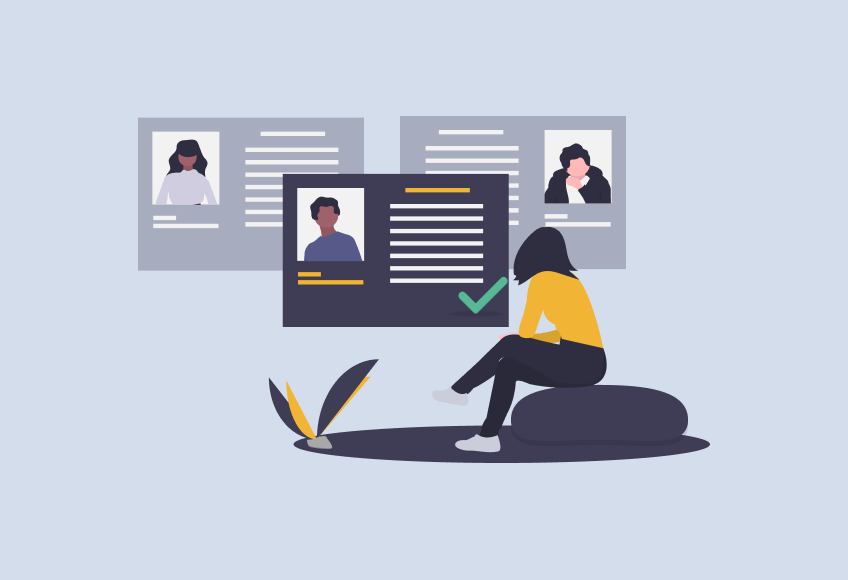 'Blind' or anonymised hiring refers to the technique of removing personal information from candidate applications during the assessment process. This is most often candidate names, but in some instances, like on Applied, it goes further: aiming to remove all socio-demographic details that might affect decision-making, such as age, home address, and even education.

Blind CVs have emerged in recent years as a popular solution to the fact that even if we don’t realise it, we respond to candidates differently when we know details about them, and that can stop us from being fair. Blind CVs can help us overcome some, if not all, of the unconscious biases that often result in people from more diverse backgrounds being overlooked for the job.

The fact that my name is Kate may tell you a bit about my parents’ preferences for names (including my mother’s ability to steer my father away from some more questionable choices!), but it will tell you next to nothing about my ability to be a capable construction worker, astronaut, or postie. But research tells us that you knowing my name is Kate when you’re assessing my fit for a job might influence you unconsciously: perhaps you had a bad experience with someone called Kate in the past, or maybe you’re just not used to women in those roles and unconsciously I don’t seem to fit the mould.  Biases can work positively too, perhaps your daughter’s name is Kate, and you unwittingly feel a little more affinity for me as a result.  Either way, it’s not telling you anything about whether I’m the best candidate for the job, so we can save you the second guessing by removing the distraction.

Why do names (and other details) affect hiring decisions?

Our brains are designed for efficiency; they seek to find patterns in our experiences that help us to make faster decisions.  These can take the form of ‘heuristics’ that act like mental shortcuts or rules of thumb and which we take in our automatic and instinctive ‘System 1’ brain.  Most of the time, these heuristics make our lives considerably better: the world is full of informational inputs, and heuristics can help us chart a faster path toward a decision.  We’d never get anything done if we deliberated from first principles about every choice we had to make using our alternative, analytical and conscious System 2 brain.

The trouble lies when our brains jump to conclusions too quickly or draw on misplaced patterns.  Unconsciously we form impressions of the world around us that sometimes means we fail to see it on its merits, and this can be particularly the case when we’re cognitively overloaded like when we’re tired, time-poor, or have lots of choices to make.  As some researchers explain: “Decision-makers who are rushed, stressed, distracted, or pressured are more likely to apply stereotypes – recalling facts in ways biased by stereotypes and making more stereotypic judgments – than decision-makers whose cognitive abilities are not similarly constrained.”

How does this relate back to hiring?  Well rough estimates suggest that recruiters and hiring managers spend as little as 10 seconds reading your CV or resume before they decide whether they want to bring you in for interview.  And we know that for many roles, there are upwards of 100 candidates for every job advertised.  That’s a lot of quick thinking going on, which can open up opportunities for inadvertent bias to creep in. In fact, studies have consistently shown that these precious 10 seconds can be critical.

Researchers the world over have now studied how small, irrelevant personal details on a candidate’s application can alter their chances of being selected to go through to the next stage.  The set up on these types of experiments - often referred to as correspondence studies - is quite simple: Researchers create a fictitious (but realistic) candidate CV and then send it out to thousands of real employers.  But before they do so, they subtly alter one or two small details on the CV so they have created two or more nearly-identical CVs, with the only exception being a name or other detail.  They then randomly assign different variants to different employers.  And then they sit back and wait for these prospective candidates to get calls to attend an interview and they measure the extent to which these small variations affect call-back rates.

One such study, done in Germany in 2016, looked at the extent to which ethnicity and religion - signalled through the name and the photo on the application - influenced a candidate’s likelihood of getting an interview. They randomly assigned 1,500 real employers to receiving an (otherwise identical) application from Sandra Bauer, Meryem Ӧztürk, or Meryem Ӧztürk when she was wearing a headscarf.  The names were specifically chosen to evoke either a person with a German heritage (Sandra Bauer) or Turkish heritage (Meryem Ӧztürk).  They found - astonishingly - that while Sandra was invited to interview 19% of the time, when the exact same application was received from Meryem without a headscarf, she received a call back just 14% of the time, and when Meryem was wearing a headscarf, she got a call back just 4% of the time.

Their study even compared different levels of discrimination based on job type.  They found that an equally-qualified Muslim Turkish woman would need to send 3.5x more applications to get the same rate of call back from a secretarial role, but a whopping 7.5x more for a chief accountant.

Studies like this one have now been done in almost every continent of the world, and have explored the impact of subtle cues of gender, race and ethnicity, caste, obesity, sexual orientation, age, and even home address (signalling wealth) can affect interview call back rates, and found rather depressingly that minority groups tend to be systematically overlooked in hiring processes.  (Side note: similar studies have also replicated findings in other markets such as rental housing, retail or even AirBnB).

A study conducted in the US found, for example, that a person with a ‘non-White’ sounding surname would need to send approximately 50% more applications out to get the same rate of call back for interview, or another way of thinking about it is they would need to have almost 8 more years of job experience to get the same response rate.

And if we agree that these sociodemographic factors are rarely - if ever - relevant to whether you can do the job at hand, we can agree that this represents a huge potential loss to individuals and to the teams who miss out on vital diversity.

Does blinding hiring work as a recruitment strategy?

It’s fair to say there have been more studies proving the existence of discrimination than there have been studying how to remove it.  But an obvious outcome of the correspondence studies is to remove access to any information that might inadvertently influence a decision.  So far, the evidence suggests that removal of names and signifiers of ethnicity can help to level the playing field, particularly in teams that don’t positively discriminate or have a strong affirmative action policy in place (which is most employers).

For example, a recent set of studies coordinated by the Victorian Government concluded that: “The result of the five pilot studies provide strong support for and useful insights into the broader implementation and further evaluation of CV de-identification in public and private organisations in Victoria”.

Interestingly, their studies showed that the impact of de-identification, or blinding, differed across job roles and organisations.  Depending on the setting, it had the effect of increasing the success rates - and reducing or even sometimes reversing the success rate gap - for women, non-Australian-born candidates, and those from lower socioeconomic backgrounds amongst other groups. These effects were not uniform and seemed to relate to different contextual challenges in each setting, with occasional evidence that the effect increased the success rates of non-minority groups in parallel.

But even in studies where the effects have been more mixed - there is almost always evidence that blinding affects the shortlisting process.  At a minimum, that’s an indicator that whether we realise it or not, we’re treating candidates differently on the basis of their name or some other factor, which ultimately corrodes the fairness we expect from job application processes.  And given the wealth of studies pointing to the presence of discrimination against minority groups, it’s likely that the average effect of removing these potentially distracting details will be positive for equality of opportunity overall.

OK great, so I just blind applications and everything will be fine?

Sadly no, while the evidence tells us that blinding will help, it’s still only one piece in a more complex puzzle of how to truly rid hiring processes of potential bias.  For example, you can blind a process all you like but if you’re still selecting candidates on how many all-men’s weightlifting championships they’ve won then you won’t make many inroads into your diversity.  However, it is a great first step to start off with and we've put together this blog on How to anonymise CVs to show you what to do. Also if you're keen for more info check out our resource centre for a whole bunch of guides and best practices on de-biasing your recruitment further.